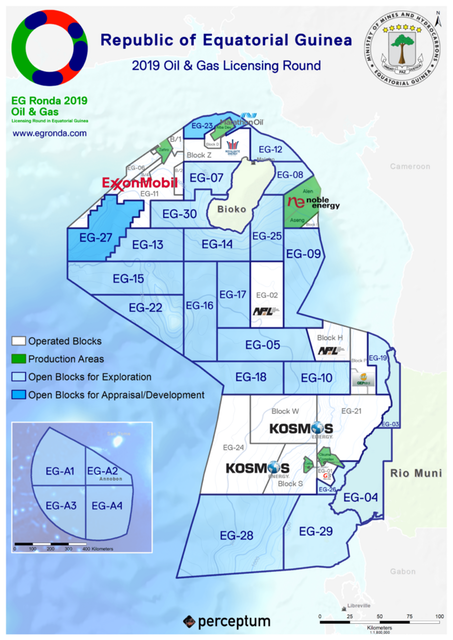 The government has made available 25 blocks for exploration and two for appraisal/development of existing discoveries under production-sharing contracts.

In the latter case, the Ministry of Mines and Hydrocarbons has extended the period of pre-qualification to tender until June 28, due to the high level of interest. But there is no requirement to pre-qualify for bidding for exploration blocks.

Deadline for all types of bids is Sept. 27, with awards due to follow on Nov. 27 at the Gas Exporting Countries Forum 5th Gas Summit in the capital Malabo.

Minister of Mines and Hydrocarbons Gabriel Mbaga Obiang Lima, speaking at yesterday’s Africa Oil & Power Investor Forum in London, said that so far there had been 15 visits to the EG Ronda 2019 data room, and that 14 companies had applied to pre-qualify for the appraisal/development blocks.

Certain other blocks on offer already have 2D and 3D coverage. In this case, the minister said, all the investor needs to do is reprocess the data then decide whether or not to drill.

After ratifying the newly awarded contracts at the end of the year, the Ministry will start preparations for a Deep and Ultra Deep Round in 2020.

Three of the main players all have active programs. ExxonMobil has been drilling five new wells to stabilize production from the Zafiro field.

Within a fortnight another rig should arrive to drill wells for Noble Energy targeting new resources, the minister added. “By the end of this summer we hope to announce positive results. The same rig will also drill for Kosmos Energy in the offshore Rio Muni basin.”

Earlier this year Noble Energy and its partners committed to develop gas from the offshore Alen field (previously reinjected to support liquids recovery), in response to the government’s call to turn Equatorial Guinea into a Gas Mega Hub for stranded offshore gas resources in this part of the Gulf of Guinea.

Alen’s gas will head through a new 70-km (43-mi), 24-in. subsea pipeline to the onshore LPG processing plant that receives production from Marathon’s offshore Alba field, and the EG LNG complex, both at Punta Europa on Bioko Island.

Lima said the government hoped the Gas Mega Hub project would lead to the development of world-class infrastructure. “Investors need to know that if they discover a gas field, they have a market.”

Other gas fields in Equatorial Guinea’s South Domain and offshore neighboring Cameroon could also be developed through Punto Europa, he suggested. “The only economic use for the gas is LNG – it’s too expensive to build a floating LNG facility in this area.”